Often the best stories start by chance. Maybe due to a series of coincidences, a chance encounter, an intuition. This is what happened to the writer Mirna Milandri, from Forlì, author of the book "The Canadian soldier and the five-day-old baby girl" (GEDI editions) in which she tells the incredible and moving story of soldier Harold W. Stevens (in the pic above, on the left), a Canadian soldier who during the Second World War saved an Italian girl of only five days, Luciana Trerè (in the pic above, on the right, today). A story that has waited more than 75 years to be told. 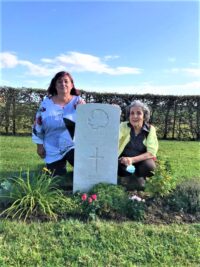 November 18, 1944: the soldier Stevens, on guard near Ravenna, hears a cry coming from the stream. The soldier goes into the water, saves the little girl and returns her to the family. His heroic deed, however, cost him his life. A few steps and he stumbles upon a German mine. Stevens will die the following day and will be buried in the Commonwealth war cemetery of Villanova, in the province of Forlì.

His name will remain unknown until, by chance, in 2019 Mirna Milandri learns of the affair from the then five-year-old girl. And after a wait of 75 years, Luciana finally knows the name of her rescuing soldier and has the opportunity to thank her family in Canada and to pay homage to him in the Canadian Commonwealth Cemetery of Villanova di Bagnacavallo (Ravenna) where his grave is (in the pic, Mirna e Luciana in front of Stevens' grave). 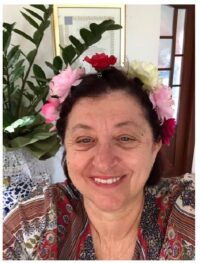 “My meeting with Luciana - says Mirna (in the pic) - was fortuitous. It happened by chance, at the right time and in the right place ”.

Mirna, tell us about it ... “It was a Saturday morning at the end of April 2019 in Forlì. Returning from work, I remembered that my daughter had asked me for a ticket for the bus, so I stopped at the first place that could sell me the ticket: a news-stand that I usually didn't go to, even if not far from where I live. Inside the newsstand, at the same moment of my request, my attention fell on publications which, displayed in plain sight, recalled the passage of the war front in our areas in 1944-1945. It was quite normal, in the period between April 25th and May 1st, to find certain publications. So I asked if I could leaf through a book that had particularly impressed me. The positive response was followed by the appearance, behind the newsagent, of a small figure of a woman with graying hair who said to me: 'If you are looking for news of the front in our area, that book does not mention it', then specified 'Describes the passage of the war front in the Tuscan-Emilian Apennines above Bologna '. Intrigued, I asked her: 'Are you saying this because you have read it?' And she: 'Yes, I have read it all, because I was saved by a Canadian soldier. I was a few days old and have always been looking for news. In truth they told me very little and I can't remember why I was just born' ”.

And from there the idea was born ... "Already. My eyes widened with curiosity and I asked her if she had time to tell her story. The conversation ended with the promise that I would find the name and photo of the Canadian soldier".

And how did you reconstruct history? "The only information I had was that Luciana was born on November 13, 1944, that the fact happened when she was five days old and that the soldier had died following the explosion of a mine immediately after returning her to her family. This beautiful and dramatic story actually intrigued me. From that moment on I started looking for news of the soldier and visited some Commonwealth Cemeteries which, unfortunately, are frequent in our region". 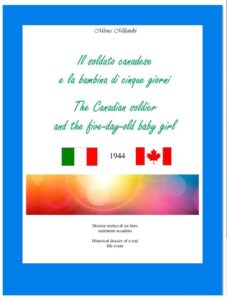 And she found all, Mirna, with the typical determination of a "young girl of another age" like her (this is how she likes to define herself), manages to reconstruct the whole story and find the name of the soldier. With the collaboration of Professors Enrico Toscano and Silvana Macrì Toscano in Toronto, he trace Stevens' family and, thus, allow Luciana to meet and thank the family of his savior in Canada and let the family know the heroic deed he performed before he died. Mission accomplished.

Now it is all told in her book "The Canadian Soldier and the five-day-old baby girl" (in the pic, the cover of the book): the English version is edited by the two Professors from Toronto.

And she, the '' Storyteller '' (her books deal with stories that really happened and the characters really lived), deals now with the transcription of a manuscript / diary of a young soldier from Forlì in prison in Germany 1943-1945. Another page of life to tell, to keep high the memory of those who fought in the name of freedom. And maybe, like Stevens, paid the highest price.

The book is avaible on the bookstores Amazon, Ibis, Libraccio or directly on: https://ilmiolibro.kataweb.it/libro/storia-e-filosofia/560516/il-soldato-canadese-e-la-bambina-di-cinque-giorni/

From internet prodigy to saint for social media

TORONTO - In the eyes of a parent, a child is a gift from God. Ask any mother and she will say her son is a saint. This reality is one step closer for one mother, Antonia. Her son, Carlo Acutis, a 15-year old Catholic, Italian, boy who died in 2006, will be beatified this […]

Turn disadvantage to positive cause - one way to beat Covid-19

TORONTO - “Don’t mope. Get busy.” Despite the disappointment of losing their jobs, the uncertainty about the future economic health and social well-being of their community, six Toronto High School graduates came up with an inspiring fund-raising initiative to help fellow Canadians affected by Covid-19. For Cailan Maurutto-Robinson, Georges Kirijian, Nolan Aziz, Tim Mulligan, Will […]
Back to Top