A poem in all languages
​​to embrace the world

We can't see each other, hugging is forbidden. And whoever is far away is staying far away, because we cannot travel. But there is poetry, which unites hearts. And if it is translated into all the languages ​​of the world, even distances fall. It’s what happened with “Parliamo con gli occhi” ("Let's talk with our eyes"), which in a few months has become a sort of multilingual anthem (from Italian to Afrikaans, an end to the language of Native Canadians) that embraces the world just when the world itself cannot. A great little miracle in a pandemic, transformed into a project called, not by chance, "Poetry embraces the world".

The author is Agata De Nuccio (in the pic), she was born in Castrignano del Capo (Lecce) and has lived for 40 years in Erbè (Verona) where she works as a social worker. And she is a poet. With her lyrics, she began at a very young age to collect acclaim and literary prizes such as the "Gaio Valerio Catullo", won in her adopted city. The first of a long series.

She has four books of poetry and two short stories for children, one of which is dedicated to emigration: "Samia e l'isola dei Pesci Rondine" ("Samia and the island of Swallowfish"), a book that for five years has been adopted by schools to talk to the very young about new migrants . “We were before”, says Agata who lives her daily emigration through writing.

What is writing, for you?
"Writing is the passport to get to know many countries. Emigrating from everyday life and from work is vital for those who, like me, have a very marked curiosity and must somehow nourish it. Thus, with tenacity and a lot of reading, writing has become a physiological need".

And how did the "Poetry embraces the world" project come about?
"I wrote the poem 'Let's talk with our eyes' in the days of 'pandemic confinement', exactly last year, and I shared it on socials. He immediately found the interest of a Sri Lankan translator ... then, gradually, others were added, it was a spontaneous and wonderful tam-tam, all this unexpected warmth! Eugenio Marino (Italian writer and journalist) read the poem and suggested that I also pass it on to his acquaintances abroad and ... from seven to eight languages ​​we have reached 14 including Arabic, Zulu, Africaans, Sinhala and language of the natives of Canada, plus the Italian sign language".

A short film was also created ...
"Exactly. Last February a young videomaker, Guglielmo Filippini, shot a short film with Italian and foreign boys, inspired by my poetry which has become a choral project, uniting people and distant voices, in a cosmic, poetic embrace, necessary in this suspended time". 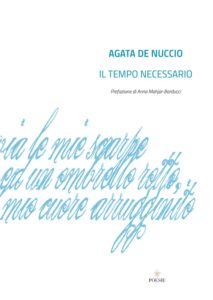 From project to project, the initiative has expanded ...
"The Italian-Canadian poet and writer Diego Bastianutti translated my other poems into English, Eugenio Marino collected everything on his site 'Andarsene sognando' ('Going away dreaming') dedicated to emigration in Italian song (http://www.andarsenesognando.it/la-poesia-abbraccia-il-mondo/) and, finally, the book 'Il tempo necessario' ('The necessary time') has been published, which collects all the translations of 'Parliamo con gli occhi', my other lyrics translated by Diego Bastianutti and which is introduced by the preface by the Italian-Moroccan journalist and writer Anna Mahjar Barducci (in the pic, the cover of the book). And then the project has received the consent of institutions and organizations of international scope such as the Dante Alighieri Society and the FPM - International Poetry Festival of Milan, as well as the Municipality of Verona".

Your poetry travels the world, and you? Did you ever "go away dreaming"?
"Yes, when at 18 I took my suitcase and left as an 'au pair' with the family of a Lebanese diplomat married to a Hungarian woman. They were my bridge to unknown worlds".

And what are you dreaming of, today?
"I dream of taking the art of poetry everywhere. In schools, libraries, parks, on monuments and on the streets. I already do it, through workshops of reading aloud and musical readings".

All that remains is to read the poem ... or "watch it with eyes", in sign language. Have a good trip.

Let's talk
We share feelings,
We recognize each other,
Hidden inside the mask,
Dry eyes and mute mouth,
Behind the masks like ghosts
That tear-burning fire
Your heart and my heart felt
We understand,
It will not be difficult for us to stay together
I've seen the suffering that
Knocked on the door to door
The soul descends like an insect
Flowers that bloom in spring,
Tells you about a new beginning
Blooming spring.
Reveals the platelet brightness of the blood
Life will be safe again.
(translation in English by Elizabeth Woods)

VANCOUVER – Never forget your roots. If they sink into a country rich in history, culture and traditions like Italy, they can become a key to success as happened to Marzia Bellotti Molatore (in the pic above), an Italian from Traona, a very small town in the province of Sondrio, who has lived in Vancouver […]

TORONTO - The construction sector is an important driver of the Canadian economy. Investments in infrastructure projects is just one way to create more jobs and stimulate economic recovery from the impacts of Covid-19. In Ontario, about 500,000 labourers are employed in the construction industry. They are the ones helping drive the economy forward. As […]

HAMILTON - Her stage is the kitchen. It is there that, in front of the camera, Deborah Verginella prepares one dish after another, merging the two passions of her life: acting and cooking. Two arts so different from each other, but with Deborah they become one, thanks to a secret recipe that only she knows […]

PIETRASANTA – His roots lie in the land of artists, where the mountains are made of marble and the plain is full of sculpture workshops: Pietrasanta, the Tuscan town that also hosted Michelangelo Buonarroti. Marcello Giorgi was born there, 59 years ago. But like any great artist, he is a citizen of the world. And […]
Back to Top