TORONTO - There was a relatively large crowd of friends, parishioners past and present, and family to bid Fr. Vito an ADDIO on Saturday. Covid-19 protocols being what they are, restrictions still applied. Nonetheless, people flocked to St Clare, Woodbridge for the funeral. Fr Vito had never been assigned there, but a smaller church would have been insufficient and inadequate for the numbers present.

It was not an ostentatious ceremony; he would not have wanted one. Nevertheless, three bishops and two Monsignors co-celebrated the Mass, while a further forty priests (by our count) filled the Choir among them some notable long serving Monsignors from the Italian community and notables from the cleric orders who have ministered to that community in and around the GTA.

It was an impressive display of thanks recognition for service rendered. Several individuals had clearly interrupted their sojourns in southerly climates to express their gratitude and their sorrow. Their presence will have provided some comfort and lessened the grief of Fr Vito’s Mother and that of his siblings.

When one of the monsignors said, in closing his eulogy “Vito was a good man” many erupted in audible sobbing. Later, after the white doves had been released, in an almost symbolic event, one lonely bird detoured to perch on the inside of the church’s portico, even as the rest of the flock flew to their destination. Some one remarked it was a sign that Vito didn’t want to leave, or that his people wanted him to stay. 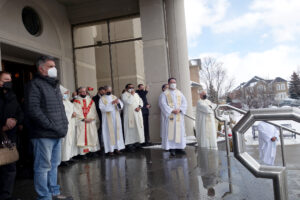 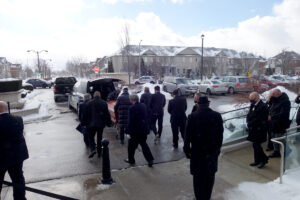 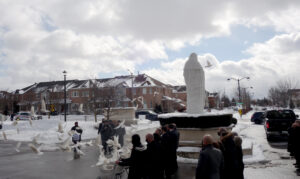 Coro di no all’eutanasia
per i malati di mente

Corso di ’Italian for Business’
per i professionisti

Avi Benlolo: “Minister Khalid must
apologize to the Jewish community”

TORONTO -  We received a letter from Avi Abraham Benlolo (in the pic above), Founding Chairman and CEO of The Abraham Global Peace Initiative, addressed to Prime Minister Justin Trudeau. Here below is the letter.

Alessandro Volpe, a Canadian
boy in an Azzurri uniform

TORONTO - Seventeen-year-old Alessandro Volpe achieved a historic first for a Canadian. As reported in our online agency CNMNG News on Friday, he has received confirmation that he has been named to the ‘Azzurri” (Italy’s) National U18 Baseball team. Inspired and led by former MLB superstar and Hall of Famer Mike Piazza (among the last in […]

Context for the Pro-Life,
Pro-Choice debate

TORONTO - As on so many issues, the USA is once again influencing the political discourse in Canada. The American Supreme Court’s (USSC) decision to roll back “rights to abortion” was immediately attacked here in Canada by our political representatives and others. Canada’s approach to the public discourse on this topic has been conditioned by both […]

TORONTO - "Intentional infliction of mental anguish": it is one of the many accusations that the 600 plaintiffs bring against the federal government in the Statement of Claim (SoC) filed in the Federal Court last May 30. Throught it, the same complainants ask, each, $ 650,000 (for a total of nearly $ 400 million) as […]

Baseball, Alessandro Volpe invited
by Italian U18 National Team
for a second look

NETTUNO (Rome) - The Italian-Canadian slugger, Alessandro Volpe (in the pic), 17 years-old, has been invited by the Italian Under 18 Baseball National Team for a second look. The "Azzurri" staff decided to invite him again to Italy as the Under 18 team prepares for the upcoming season, Alessandro will leave for Italy in the […]

“Horse play” at its finest

TORONTO - For the first time since the onset of the pandemic, some 50 riders successfully kicked off their “show season” this past weekend, unhindered by the restrictions of Covid-19. Discipline, dedication and a love of horses, drive people to participate in horsemanship. Whether it’s for sport or recreation, horseback riding can offer great benefits […]

The Pope to the Natives: "Indignation
and shame for residential schools.
With all my heart, I am very sorry"

VATICAN CITY - "Indignation and shame" for what happened in residential school in Canada: "for the deplorable conduct of those members of the Catholic Church, I ask for God's forgiveness and I want to say to you with all my heart: I am very sorry". After private meetings between Pope Francis and First Nations, Inuit […]

TORONTO - Less than three months away, Ontarians will head to the polls to elect their next provincial government. Voting day, June 2, is rapidly approaching and the campaign is well underway. This campaign will look similar to those of the past, especially as Covid restrictions ease throughout the province and life begins to resemble […]

TORONTO - Member of Parliament for Calgary Nose Hill, Michelle Rempel Garner has been named the campaign Co-Chair for Conservative leader contender Patrick Brown (in the pic above - credits Pajdo), Mayor of Brampton. In a bid to appeal to supporters in the west, Brown made the announcement on March 19, the same day he […]

TORONTO - The following is an edited version of a document co-authored by Tony Iannuzzi, Executive Secretary Treasurer and Mike Yorke, President of the Carpenters’ District Council of Ontario (CDCO), in preparation for the Budget consultation by the Ontario Government. Investments in infrastructure are crucial to a strong economic recovery for Ontario and Canada as […]

TORONTO - It is the largest donation to help build the largest hospital in Canadian history. The Trillium Health Partners (THP) announced the $105 Million donation from the Peter Gilgan Foundation in a press release (February 15). The historic donation will help expand and redevelop facilities at two of THP’s three locations, the Mississauga Hospital […]

Time for web giants
to “pay their fair share”

TORONTO - Traditionally, media outlets have relied on advertising as a main source of funding for years. They have increasingly moved to government subsidy models through which federal funding has become essential to their survival. But there is increasing pressure on the Federal Government to act on the issue of news media remuneration. Earlier this […]

TORONTO - The world of communications is constantly evolving. Over 3.6 billion people worldwide use social media to stay connected, to share content and to stay informed. Digital platforms play a major role as they are the pathways through which people access their news and information (see graph 1, below). The symbiotic relationship between news […]

TORONTO - Over the years, it has become easier for people to create and share content online. On February 2, the Federal Government introduced the Online Streaming Act (OSA), Bill C-11. The proposed legislation aims to modernize the Broadcasting Act which has changed little since 1991, before the internet became more accessible to people worldwide. […]

TORONTO - Oakville Trustee Nancy Guzzo was before the Hamilton courts (January 28) fighting twelve counts of fraud. The matter, which has been before the courts for over one year, will have to wait until 2023 for any sort of conclusion. The charges dating from 2017 and 2018 relate to her previous employment with the […]

HCDSB breaks with tradition
and will fly the Pride flag

TORONTO - Breaking with tradition, the Halton Catholic District School Board (HCDSB) has reversed its position and voted in favour of flying the rainbow flag in June to mark Pride month. The HCDSB is the latest Catholic school board in Ontario to do so after having previously voted to not do so. In the early […]

Credito d’imposta
per i viaggiatori locali

TORONTO - The ups and down of the last two years may have many of us thinking it’s time to take a break and get away. However, the rise in Covid infections, the constantly changing requirements for travel and fears of getting stuck in a foreign country have many of us opting for a vacation […]

Volano i prezzi delle case
a Toronto: +20% in un anno

TORONTO - The month of November, also known as Movember, is a time to raise awareness of men’s health issues including prostate cancer. New data reveals that continued progress in early detection and breakthrough treatments have cut the prostate cancer death rate by half over the last 26 years. Prostate cancer is the most common […]

TORONTO - With the cost of living on the rise, more Canadians are turning to food banks for support. According to a new report, HungerCount 2021 from Food Banks Canada, in March of 2021, more than 1.3 million Canadians visited food banks. Nationally, the demand for food banks increased by 20% compared to March 2019, […]

I contagi corrono nelle scuole,
in arrivo i test PCR

TORONTO - The Ontario government has lifted capacity limits and made life a little easier for some establishments like restaurants, gyms and event spaces. Unfortunately, the provincial government has failed to meet the needs of individual with disabilities and specifically those unable to be vaccinated for Covid-19. Establishments that require proof of Covid-19 vaccination remain […]

TORONTO - St. Joseph’s Healthcare Hamilton (SJHH) opens Ontario’s first Monoclonal Antibody Therapy Clinic. It is the first of its kind in the province, dedicated to treating outpatients with Covid-19 who are at a greater risk of severe illness, complications and hospitalization. The monoclonal antibody is a protein. When introduced in the body, via intravenous, […]

TORONTO - Education leads to better understanding. In this regard, the Ontario Government is making changes to strengthen mandatory Indigenous-focused learning in school curriculum. The announcement comes during the same week that Canada marks the first National Day of Truth and Reconciliation. In addition to the existing funding for the 2021-2022 academic year, the Ministry […]

TORONTO - Lower case counts, improvements in key health indicators and higher vaccination rates are the basis for the easing of further restrictions. That is what is driving the momentum in the province’s “Roadmap to Reopen”. To further that agenda, starting today at 8am, youth aged 12-17 can now book an accelerated second dose vaccine […]

On Sunday, Pope Francis expressed shock and sorrow after “the discovery in Canada of the remains of 215 children, pupils of the Kamloops Indian Residential School in the province of British Columbia”. During his weekly address to the crowd in Saint Peter’s Square Sunday afternoon, the Pope said he “joins the Canadian Bishops and the […]

A renewed pledge to restore,
protect and conserve the Great Lakes

TORONTO - North America is home to the world’s largest freshwater lake system in the world. The Five Great Lakes: Superior, Huron, Michigan, Erie and Ontario hold roughly, 5,400 cubic miles of water, accounting for approximately 20% of the world’s surface freshwater. That is something worth protecting. To commemorate the 50th anniversary of the signing […]

TORONTO - The Carpenters’ District Council of Ontario (CDCO) calls for united action to end tax fraud in the construction industry. On April 6, the CDCO launched their campaign to stop tax fraud and put an end to illegal worksites: notaxfraud.com The campaign is designed to raise public awareness about the fraudulent activities within the […]

Trouble for the Canadian economy
as international students numbers decline

TORONTO - Education in Canada is big business. International students contribute more than $21 billion each year to the Canadian economy and promote diversity within communities. The pandemic has presented a variety of challenges for international students resulting in a drop in enrollment numbers. The effects could have a negative economic impact. In 2020, the […]

TORONTO - The investigation is ongoing into the active outbreak at Canada post. Customers should expect shipping delays. The Gateway facility in Mississauga continues to struggle with containing the virus. Since January 1, 273 employees have tested positive for the virus. On Friday, according to a source from the Gateway site, speaking on condition of […]

Derelict admin: Canada lags in the race to vaccinate

TORONTO - The new year should bring a renewed sense of hope and optimism. Despite being in the middle of a global pandemic, Canadians were hopeful that life would soon return to normal. Afterall, our country was one of the first in the world to approve the Pfizer-BioNTech Covid-19 vaccine early in December 2020.Things looked […]

Vaccines: a promise of immunity, a return to normal?

TORONTO - It has taken ten months for Canada to launch a monumental campaign to inoculate against the novel coronavirus. Hopefully, this may signal the beginning of the end for the pandemic in Canada. As of Monday, the largest vaccination campaign in Canadian history is now underway. Quebec and Ontario are the first provinces to […]