TORONTO - York Catholic District School Board: total chaos, one week before schools are scheduled to open. One needed to be there to appreciate the confusion at the first Board meeting of the 2022-2023.

It started with a celebratory Mass conducted virtually by Bishop Boissoneau, followed by a snack/meal for trustees and Staff. Six trustees were not in attendance. The public was kept out of the premises until 7:20 PM (in the pic below). 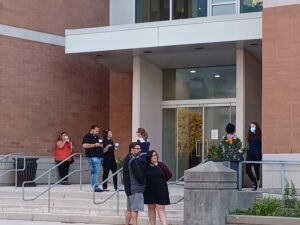 The public included a team of CUPE members, a parent group concerned with where their children will go to school in September and two representatives of Corriere Canadese. We had been invited to attend by trustee Theresa Mc Nicol two months ago and enticed to do so because there would be a big reveal. She attended “virtually”. As did Trustee Alexander who had filed a notice of Motion re the crucifix.

Five trustees did not attend, virtually or in person, as they had advised they would not until their allegations of public harassment and discrimination by Mc Nicol and abetted by the indifference of trustees Cotton, Crowe and Wigston would be resolved in an open forum.

There was consequently no quorum to allow the meeting to go forward (in the pic above, the meeting). The Chair waited the prescribed 30 minutes then dissolved the meeting and called for a meeting to take place this Friday at 10:00 am, virtually. If that does not take place, the exercise is repeated again at the end of September.

Meanwhile, a Board with an operating expenses budget of $ 607 million with a projected total student population of 49,394, salary negotiations with teachers and support workers on the table, cannot make any decisions that will be considered legal. We spoke to both the Chair and the Secretary Director, on the record. And will come back to that after Friday.

The issue has been stewing since the latter part of 2021 when Mc Nicol attempted to reprofile the order of the opening prayer with a land acknowledgement nod to the Aboriginal community. The Five Italian Canadian trustees and Trustee Alexander, an African Canadian, voted to maintain the status quo: in a Catholic institution, prayer first everything else subsequent. Cotton Crowe and Wigston walked out of the meeting to avoid voting.

Mc Nicol’s allegedly began a series of tactics via e-mail, social media and in-person taunts which were interpreted as harassment by their targeted group. It culminated with her apparent request to have police security at Board meetings because of the threat to personal security she alleged the Italian Canadian trustees posed to their colleagues. Trustee Giuliani invited a police “investigation” to clear the air.

The Ministry and the Minister, Stephen Lecce, the lead political figure in York region, declined to be involved. Too bad. By February, the dysfunctionality spilled over onto local decisions involving the allocation of instructional spaces. In one school, Pope Francis, in Kleinberg, the Director’s staff offered a solution to overflow enrolment that tests credulity: a lottery system for new Catholic.

Their appeal to Lecce apparently was met with a “cannot get involved because of a conflict” – as the local MPP, he would be in conflict with the Minister (himself). I know, it takes a while to sort that out. Almost as confusing as the Director, an Italian Canadian, declining to engage in resolving the issue of ethnic discrimination because, well… I don’t want to tell you.

In Lecce’s case, he probably could have paid for the “port-a-pack” required to resolve the accommodation problem for the amount he disbursed to the individual he sent to disrupt our interview with the parents.

All the pics are by Corriere Canadese's staff

TORONTO - It has been a brutal year. No news here. What most of us have glossed over is the personal and emotional losses of so many friends and neighbours. Deaths have become little more than a statistic. The “ties that bind” have become so loosened by rules and regulations that we have begun to […]

City Council walks back its threat
to pull advertising from Corriere

TORONTO - It had no other choice. An ill-conceived Motion to censure the Corriere for articles published about a School Board (Catholic) over which a City Council has NO jurisdiction was withdrawn - amended as a face-saving exercise. The amended version (here below) was accepted unanimously, including its “mover” and her cabal. That didn’t stop […]

Change is in the air: the Conservatives
certainly hope so

TORONTO - In the 1960s, frequently referred to as the golden age of popular music in Western societies, there was no shortage of songs whose lyrics aimed at having the listeners reflect of the ‘human condition’ and the wistful failure of ideologies to produce the Utopia they espoused. It was not all grim. What does […]

Who is in charge?
Minister Lecce declares war
on truth and consequence

TORONTO - Let’s begin with accountability and transparency, two words whose meaning in the hands of spin doctors can be turned to nuisance, disjointed alphabet particles. There are two departments (Ministries) of government whose combined budgets account for the bulk of government expenditures. They are Health and Education. That should surprise no one. We all […]

Cautious optimism: a Canada – Italy link in a therapy for Covid-19 patients

TORONTO - Breaking news: a therapy in the offing to defeat the voracious appetite of the Novel Coronavirus. Good news: patents have been registered in Washington (DC) USA, Italy, England and Canada; and testing protocols are being subjected to the strictures of participating Universities and hospitals from those countries (so far, Cambridge (UK) Concordia (Canada)and […]
Back to Top